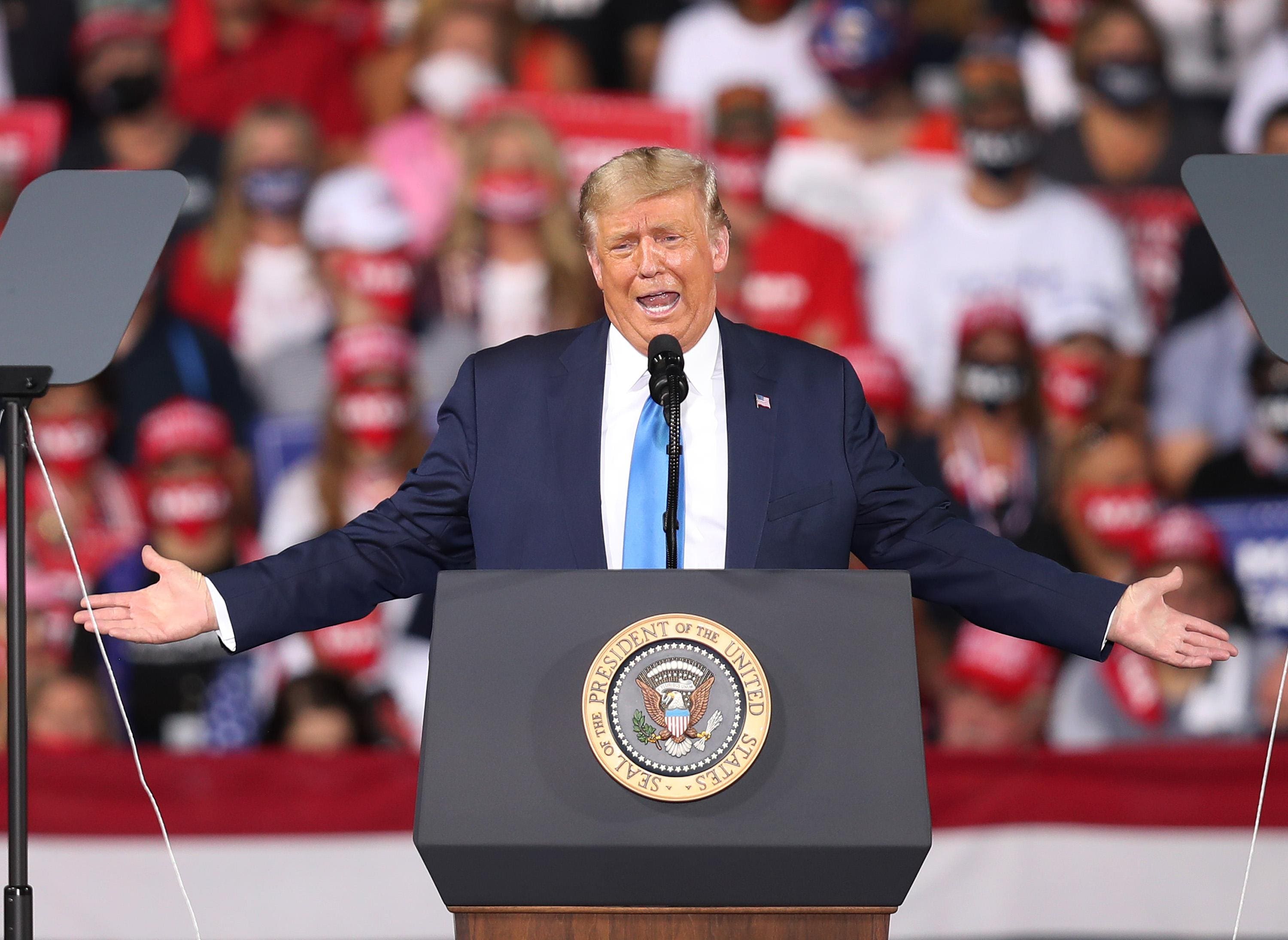 President Trump has made some claims recently about U.S. ethanol and oil production that warrant further scrutiny.

No force in financial markets is as powerful and predictable as “mean reversion,” the tendency of stock and bond prices that are extraordinarily high or low versus history to return to their long-term norms. The big drop we’re now seeing in tech shares looks like a classic case in point, as economic gravity takes charge, pulling high-flying prices closer to where they’ve traditionally hovered relative to earnings. We’re hearing sundry explanations for the fall—”a second lockdown is on the way,” “chances for new stimulus are fading,” or “the trade war with China is endangering Big Tech”—but the one that makes the most sense is most basic: mean reversion that comes and goes, but always comes again.

In a previous story, this reporter studied the amazing trajectory of the 10 highest market-cap technology companies in the Nasdaq 100, a group I dubbed “StarTech.” I treated StarTech as one big company. Since StarTech’s record close on Sept. 2, its valuation has cratered from $10.47 trillion to $8.76 trillion, shedding 16.4% or $1.7 trillion, equivalent to one-eighth more than Microsoft’s current market cap.

The fall is so substantial that you’d think we might be nearing bargain territory. More likely, mean reversion has just begun, and it has a long way to go. That’s because StarTech hasn’t come close to retracing the giant spike that took its shares from moderately priced to outrageously expensive. Amazingly, that moonshot began less than a year ago, in the fall of 2019. On Sept. 30 of last year, StarTech comprised the following members in descending order of valuation: Microsoft, Apple, Amazon, Alphabet, Facebook, Intel, Cisco, Adobe, PayPal, and Tesla (which bills itself, and gets valued, as a tech pioneer). Since the Nasdaq counts Alphabet’s A and B shares separately, StarTech actually encompasses not 10 but 11 members.

At the time, StarTech’s market cap stood at $5.822 trillion, and its combined GAAP, four-quarter trailing net earnings were $224 billion. So its price/earnings multiple was 26, a big increase from its level of 19 in 2015, but in line with its average over the previous half-decade. From Sept. 30, 2019, to Sept. 2 of this year, Intel and Cisco left the group, replaced by Netflix and Nvidia—a significant shift since the prior pair’s profits were a lot higher relative to

Country A is home to one of the oldest stock exchanges in the world where the rule of law is rock solid, and investors are afforded rigorous protections.

Country B is essentially a petrol state that ranks low on various financial freedom indexes. Its relatively recent transition to a market-based economy has been bumpy, and its embrace of democratic processes and norms has been widely criticized by human rights groups. Country B’s President, for example, recently changed the constitution to extend his rule by decades and is widely suspected of routinely poisoning his political foes.

And yet to investors, the two countries are widely indistinguishable. They’re both seen as a lousy place to sink your spare cash.

You’ve probably guessed Country B is Russia. And Country A? That’s the United Kingdom.

Investors who are long U.K. equities watched incredulously in March as their portfolios sank precipitously and have watched with just as much surprise as it’s failed to recover to the levels of its European peers.

Down roughly 23% year to date, the once mighty FTSE 100 is underperforming just about every major European exchange and is miles behind the major U.S. indexes. 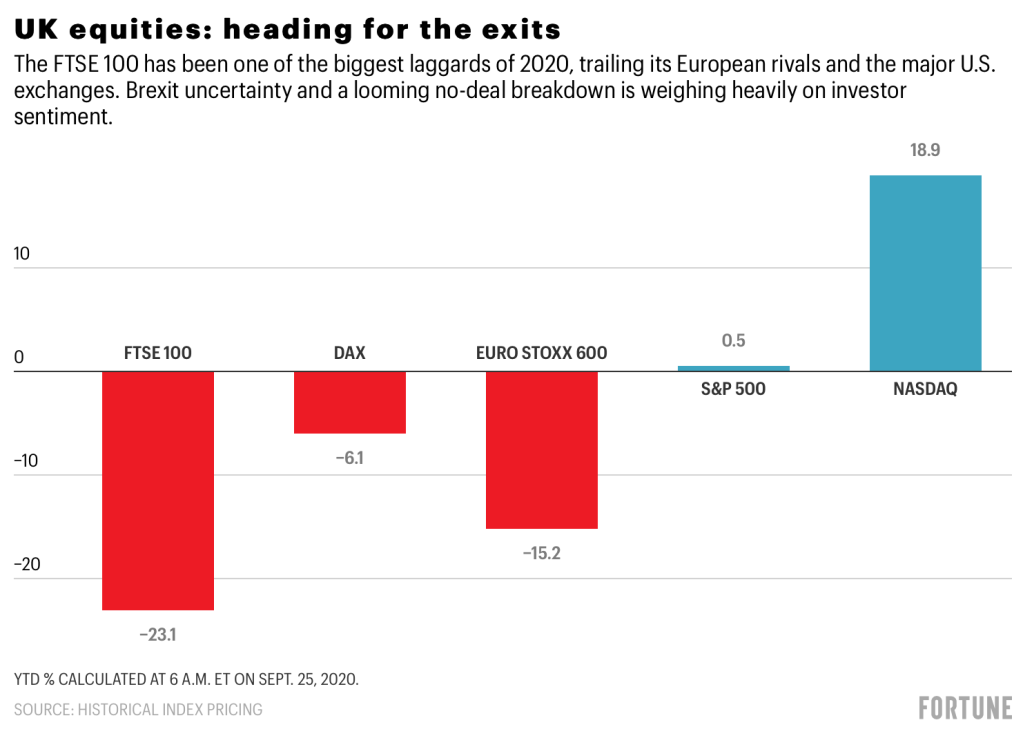 But Dewi John, head of research, United Kingdom & Ireland, at Refinitiv Lipper, sees troubling parallels with another exchange—that of the MSCI Russia.

“The FTSE 100 performance’s closest match is to MSCI Russia, an .83 correlation, which is tight,” he notes.

He shared this stock chart, which shows the London and Moscow shares in near lockstep since the start of the year. Note: The FTSE 100 index is in orange; the MSCI Russia index is in purple. 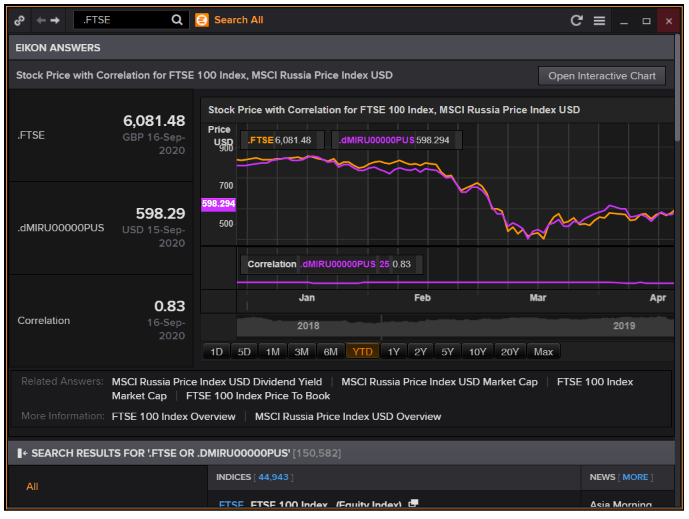 The matchup astounded John, adding that the two countries, as investment options, could 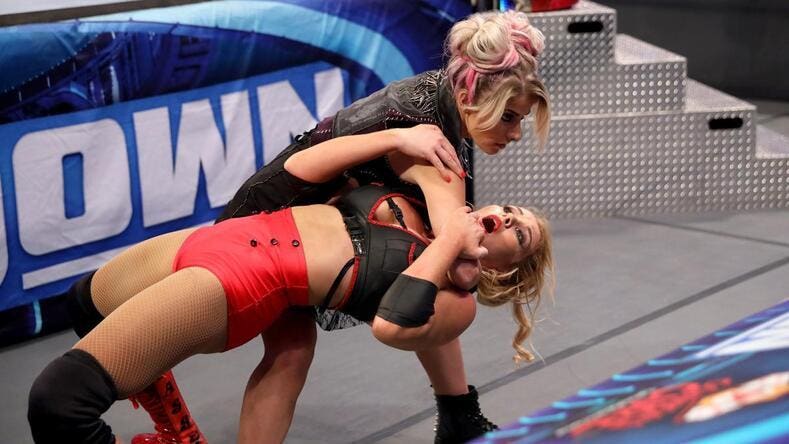